Within an area of about 24x11 km west of Castignon Lake numerous dykes and diatremes of carbonatite and meimechite cut early Proterozoic (Aphebian) sediments of the Labrador trough (Dimroth, 1970). There are about a dozen diatremes of which the largest is approximately 950x900 m. The dykes are up to 20 m thick and generally less than 20 times longer than their thickness, although a few are much longer. At the largest diatreme a collar of bedded carbonatite tuff is present and a flow-banded carbonatite sill has been intruded at the base of the tuff. The rocks occurring in the dykes and diatremes vary from biotite, olivine and apatite-fluorite carbonatites to meimechites consisting of phenocrysts of serpentinized olivine plus/minus biotite and magnetite in a groundmass of serpentine, chlorite, magnetite and some carbonate. Rocks intermediate in composition between carbonatite and meimechite are widespread. The meimechites occur as lapilli tuffs and garnet-mica peridotite is found at one locality. The carbonatites consist of ankerite, sometimes as phenocrysts, while accessory magnetite, possible perovskite, apatite, serpentine and talc are usual. The carbonate of the meimechite tuffs and the carbonatite sill is calcite. Many localities consist wholly or partly of breccias which may comprise solely fragments of the igneous rocks already described or country rocks, both Proterozoic sediments and underlying Archaean gneisses. Breccia cements may be carbonatitic or meimechitic. Apart from brecciation and minor impregnation with carbonate alteration of the wall rocks of diatremes or dykes has not been observed. Analyses of carbonatites indicate 11-29% SiO2 and amounts of SrO (100-2000 p.p.m.), BaO (20-200 p.p.m.), Nb2O5 (200-400 p.p.m.) and La2O3 (400-600 p.p.m.) are higher than average for ultrabasic rocks, but somewhat low for carbonatites. The contents of iron are too high and the MgO and CaO too low for kimberlitic rocks. Categorization of all these rocks is far from clear. Several occurrences of lamprophyres north of the area covered by Dimroth (1970) are described by Dressler (1975). 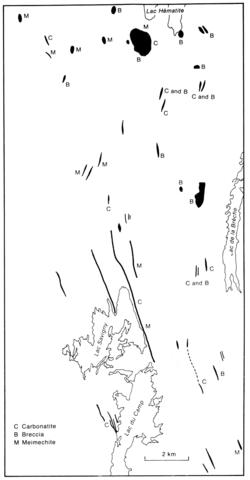