Brome forms a horseshoe of four peaks rising some 350 m above the surrounding country. It is emplaced in folded and metamorphosed Cambro-Ordovician sedimentary rocks which are metamorphosed 300- 400 m from the contact, locally reaching sanidinite facies and with the production of melilite and kalsilite in some rocks (Philpotts et al., 1967). The southern part of the complex is dominated by an arc of gabbroic rocks, while in the more northerly parts a range of alkali syenites including pulaskite, nordmarkite, porphyritic microsyenite, foyaite and tinguaite are predominant, with intermediate biotite and nepheline monzodiorites also present. The gabbros were the earliest rocks intruded, followed by the intermediate rocks and these in turn by the syenites of which the more strongly undersaturated foyaites and tinguaites came last. The gabbros have a vertical contact with the country rocks and form a rhythmically and phase-layered and foliated unit dipping at an average 45° inwards. The gabbro has been divided into five units based on the presence or absence of olivine. The biotite monzodiorites comprise zoned plagioclase, orthoclase, biotite, kaersutite, clinopyroxene, apatite and opaques; there is a wide variation in the plagioclase to alkali feldspar ratio. The nepheline monzodiorites are foliated rocks with inclusions, sometimes very abundant, of monzodiorite, and vary from nepheline diorites to nepheline syenites. They contain zoned plagioclase (An50-20), alkali feldspar, kaersutite zoned to ferrohastingsite, clinopyroxene with aegirine-augite rims, nepheline, sodalite and accessories. Nordmarkites consist of 90% alkali feldspar, augite zoned to aegirine-augite, amphibole, biotite, fayalite and opaques, with very small quantities of quartz, usually in miarolitic cavities. The porphyritic microsyenite is similar to the nordmarkite except that it contains plagioclase phenocrysts partly replaced by alkali feldspar. Pulaskite comprises 90% microperthite, alkali feldspar, augite zoned to aegirine-augite, ferrohastingsite, nepheline and sodalite, and these rocks possibly grade into the nordmarkites. The foyaites have up to 40% nepheline, together with ferrohastingsite, augite zoned to aegirine-augite, biotite, melanite and sodalite. Tinguaite forms a small body on the west flank of Brome, in which it is intimately associated with laurdalite, forms the matrix of certain breccias, and also occurs as dykes. The tinguaite is a nepheline porphyry while the laurdalite is a medium grained rock of alkali feldspar with albite rims, up to 40% nepheline and augite zoned to aegirine-augite. Rare camptonite dykes cut the intrusion and country rocks. Analyses for major and trace elements, including REE and Sr isotopes, will be found in Eby (1985a) who also gives some pyroxene and olivine data; lead isotope data will be found in Eby (1985b). 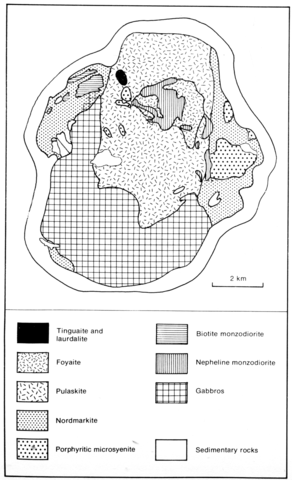