Situated in downtown Montreal, Mount Royal rises to over 200 m above the surrounding city, and is an oval-shaped stock of 2.8x1.6 km which cuts and metamorphoses Ordovician limestones and shales. The core of the mountain is a melanocratic gabbro with marginal leucocratic gabbro, nepheline syenite and nepheline-bearing diorite, together with numerous and varied dykes. The melanocratic gabbro grades locally into amphibole pyroxenite, olivine pyroxenite (wehrlite) and leucocratic gabbro, and is commonly foliated and locally banded, particularly close to the eastern margin. It is very variable in grain size, generally has a colour index greater than 75, and consists of augite, with green rims, kaersutite, minor olivine (Fo80-64), 5-20% magnetite and ilmenite, and up to 20% interstitial plagioclase (An90-30). Leucocratic gabbro occurs principally as lenticular masses near the margins, has a colour index less than 40, and is foliated and sometimes layered; it contains occasional nepheline and orthoclase. Nepheline diorite is intruded into the layered rocks of the gabbro and consists of some 50% zoned plagioclase (An57- 28), 10% nepheline, orthoclase, nosean, about 10% kaersutite/hastingsite, often with augite cores, a little biotite, opaques, sphene and apatite. Nepheline syenite dykes of several generations cut the gabbros, and constitute from 50-100% of the northern part of the stock. They consist of normally zoned plagioclase (An50-18), perthitic alkali feldspar, 5-25% kaersutite, zoned to ferrohastingsite, augite, often zoned to pale green rims, 6-34% nepheline plus sodalite, and accessories including melanite and fluorite. A few dykes prove to be quartz-bearing syenites; a maximum of only 2% quartz occurs and apart from the absence of feldspathoid, the mineralogy is similar to that of the nepheline syenites except that amphibole is absent. Limestone and shale of the metamorphic aureole are deformed in a zone up to 40 m wide. The limestones are altered to skarns of varied mineralogy, while the shales are transformed into cordierite hornfels, the whole assemblage being diagnostic of the pyroxene hornfels facies. Several periods of dyke injection occurred, apart from the nepheline syenite dykes, including bostonites, mica tinguaites, tinguaite porphyries, camptonites, monchiquites and maenaite (Bancroft and Howard, 1923). Numerous chemical analyses are available (Gelinas, 1972 and references cited therein), including REE and Sr isotope data (Eby, 1984a) and Pb isotopes (Eby, 1985b). 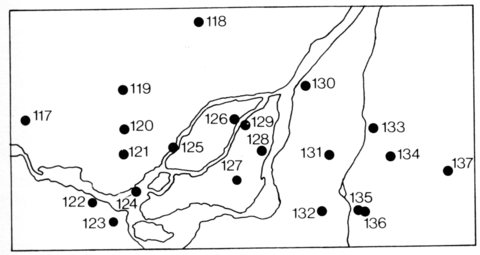