Numerous arcuate carbonatite dykes are emplaced in a large body of aplite, while many breccia bodies are found both in the aplite and the surrounding syenites and gneisses. Fenitization is associated with both types of body. The dykes are principally of dolomite-calcite rock which is distinctly foliated, commonly with alternating layers of dolomite and calcite, but there are pure calcite and pure dolomite rocks, the former usually adjacent to the margin of the dykes. Apatite tends to lie parallel to the foliation and varies from 0-100% of the rock. Amphibole, phlogopite-vermiculite, pyrite, magnetite and pyrrhotine are ubiquitous while betafite, baryte, fluorite and quartz are also found. Both within and around the aplite bodies are calcite veins. The same minerals as in the dolomitic carbonatite occur together with sodic pyroxene, zircon and galena. The breccia bodies, the largest of which is some 130 m long, consist of angular fragments of aplite and syenite in a matrix of phlogopite, apatite and calcite. Accessory minerals are similar to those of the calcite veins. Fenitization extends for up to 60-70 m from the carbonatite dykes. In the outer zones plagioclase becomes more sodic and sodic amphiboles, apatite and calcite appear. Near the dykes aplite is entirely transformed to phlogopite and richterite, and the wall rock of some veins is entirely eckermannite with subsidiary phlogopite. Around the breccias fenitization is less apparent, but for a few cm phlogopite, eckermannite, aegirine-augite, apatite and calcite are developed. 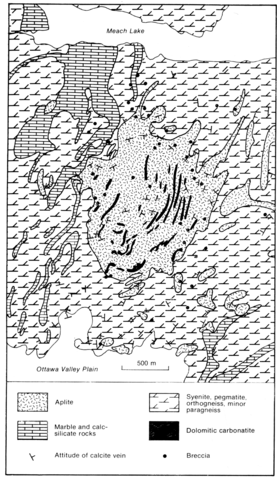