Gracefield consists of an earlier 7.5 km2, crescent-shaped intrusion of syenite with minor melasyenite and nepheline syenite and a later 4 km2 biotite syenite. The syenite of the earlier intrusion is a heterogeneous rock of alkali feldspar, clinopyroxene, amphibole, biotite, calcite and accessories. Nepheline syenite appears to occur as two dyke-like masses that cut the earlier syenite. Melasyenite, which contains up to 10% calcite or apatite, is scattered as small areas throughout. The later syenite is more homogeneous with biotite the predominant mafic phase. A geological map will be found in Corriveau (1985, Fig. 22.4). 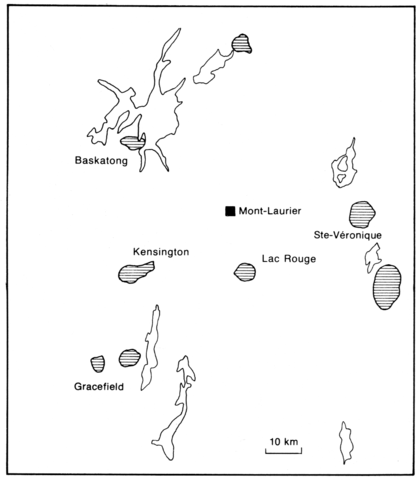