The Brent crater forms an almost circular depression 3-4 km in diameter. The central part of the crater is occupied by Ordovician limestones, around which are Precambrian gneisses. Around the periphery of the crater the rocks are variably fractured or brecciated and metasomatized. Metasomatized rocks are also found in a number of areas up to 7 km away. As the crater is approached the gneisses become fractured with the development of numerous reddish veinlets and fracture fillings of hematite, chlorite, calcite and locally prehnite. Close to the crater the rocks pass into breccias and the veinlets increase in abundance. The alteration is a fenitization with decrease in quartz, increase in perthite, and change in structural state of the feldspar from orthoclase, through maximum microcline to orthoclase plus sanidine. Plagioclase decreases in amount and mafic minerals are replaced by chlorite; in one rock riebeckite was observed and calcite also increases. These changes are accompanied by a marked increase in K2O. Trachytic rocks have been found as loose boulders and in a drill hole put down in the central part of the crater. In section these prove to be alkali feldspar with a trachytic texture, augite with aegirine rims, though the mafic minerals are usually altered, and hematite. Analyses show 7-11.5% K2O. Lamprophyre dykes vary from phlogopite-carbonate-chlorite types to phlogopite-augite-carbonate rocks with pseudomorphs after olivine. Two were found with carbonate ocelli. It has been suggested that Brent crater was formed by meteorite impact (see references cited in Currie, 1971), but the progressive potassic fenitization indicates the probable existence of a carbonatite beneath the crater. 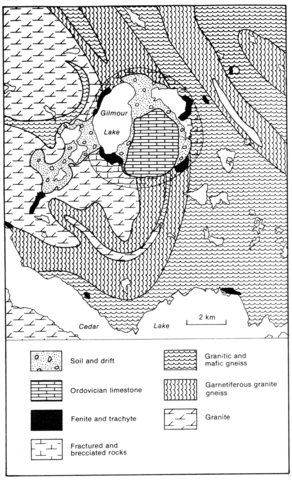