Callander Bay is an almost circular complex some 3 km in diameter centred on Callander Bay at the eastern end of Lake Nipissing. Most of the central intrusive part of the complex underlies the bay, only the fenite aureole, a relatively small area of nepheline syenites and some dykes and veins of carbonatite outcropping around the lake. The country rocks are Precambrian granites and gneisses within which are lenticular masses of biotite-garnet amphibolite. Fenitization extends to about 1 km from the mappable and estimated intrusive margin and has been subdivided by Ferguson and Currie (1972) into three zones. The outer zone is characterized by narrow breccia veinlets, hematization and rare sodic pyroxene. The middle zone fenites have an enhanced foliation with the development of sodic pyroxenes and amphiboles; brecciation is extensive, and veins of igneous-looking alkaline rocks, carbonate, baryte, fluorite and sodic amphibole occur. In the inner zone the original foliation is faint and contorted, and folded rocks mixed with massive rocks of igneous appearance are usual; the rocks are generally red, the original fabric destroyed, and there are numerous monomineralic veinlets of hematite, aegirine, carbonate and K-feldspar, sometimes associated with sulphides. The fenitization of country rock amphibolites has been described separately (Currie and Ferguson, 1972) and is distinguishable principally by the greater development of amphibole in the fenites. Potassium-rich (up to 12.8% K2O) trachytic dykes and veins occur in the fenites and are often associated with carbonatite. Nepheline syenite crops out along the northeastern shore of Callander Bay and forms a few dykes, up to 20 m thick, within the fenites. Mesocratic and leucocratic varieties are distinguished and comprise perthite, aegirine, up to 45% nepheline, sometimes altered to cancrinite, sericite or analcime, a little biotite and accessories. One nepheline syenite dyke contains what appears to be pseudoleucite. Chemically the nepheline syenites are distinctly potassic. Dykes and sheets of carbonatite crop out on Darling Island and in the fenite aureole in the southeast. A drill hole 0.7 km west- northwest of Burford Point encountered carbonatite with a maximum continuous intervention of 10 m. Fenite aureoles along carbonatite dykes are up to five times the width of the dyke. Carbonatites consist of calcite, some dolomite, K-feldspar, biotite, chlorite, aegirine, magnetite, apatite, baryte, pyrite and rare chalcopyrite and pyrrhotine. Lamprophyre dykes occur in the fenite aureole, but also up to 20 km from the complex. The majority contain phenocrysts of altered olivine, zoned diopside- aegirine and biotite, and in a minority kaersutite substitutes for olivine. Ocelli are ubiquitous, up to 2.5 cm in diameter and comprise 7-16% of the rock. They are ascribed to liquid immiscibility (Ferguson and Currie, 1971). REE have been determined on two lamprophyres and their ocelli by Cullers and Medaris (1977). Four areas of fenitization occur outside the principal aureole, and at up to 13 km distance (Ferguson and Currie, 1972 p. 13). 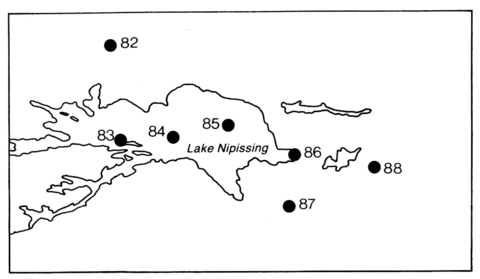