This complex is intruded into Precambrian granite gneisses and quartz gabbros. Outcrop is scarce but there is a strong, double aeromagnetic anomaly. There is a variety of ultramafic rocks, many showing layering, and including olivine and hornblende pyroxenite and hornblendite, all with variable Ti-magnetite and abundant sphene. These are cut by late segregation veins rich in aegirine. Carbonatites cut the ultramafic rocks. In the western part they form a plug-like body and comprise calcite and dolomitic carbonatites with apatite, richterite to arfvedsonite, phlogopite, olivine and titaniferous clinohumite. Pyrochlore has not been reported. The eastern part has apatite- dolomite carbonatite. There has been deep erosion, probably by karst development and collapse, producing an extensive depression about 200 m deep, which is filled with lacustrine sediments overlying a residual layer rich in apatite. Pollen as old as Cretaceous has been identified in the sediments. 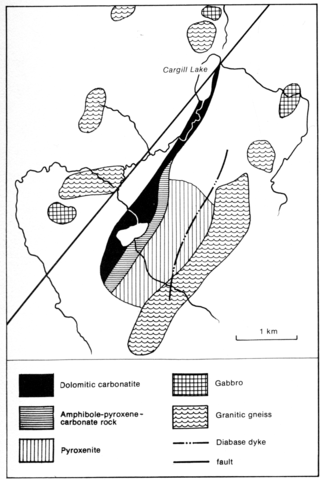