Two occurrences of lapis lazuli are located near Lake Harbour at the southern end of Baffin Island. They are present as conformable lenses, up to 168 m long and 8 m wide, within tightly folded synforms of marble. The lapis lazuli rock consists of disseminated hauyne, diopside and plagioclase in coarse grained marble, amongst which are blocks of purer rock up to 1 m across consisting of hauyne (4-42%), diopside (16-62%), nepheline (up to 20%), plagioclase (An10-25) and phlogopite, with occasional scapolite, tremolite, sphene, apatite, pyrite and pyrrhotine (Hogarth, 1971). A general, and illustrated, account is given by Grice and Gault (1983) who give a numnber of mineral analyses. 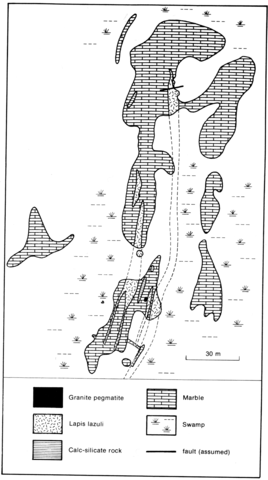