Located along the eastern margin of the Similkameen batholith, of which it is a border phase, and emplaced in metasedimentary and volcanic rocks of the Permian/Triassic Kobau Formation, Kruger Mountain is itself apparently intruded by granodiorites of the batholith. The southern end lies in the U.S. (174-00-096). The principal rock type of the Kruger body is a mesocratic to melanocratic malignite with some varieties containing more than 50% mafic minerals. Pyroxene is a greenish augite (25-90%) with variable biotite, hastingsite, euhedral melanite, microcline and nepheline, which is usually altered and absent from some rocks. Nepheline syenites occur as leucocratic and mesocratic varieties, the former usually foliated and the latter sometimes forming thin dykes which cut both the leucocratic nepheline syenite and the malignite. The leucocratic nepheline syenite consists of microcline, with albitic rims, interstitial, altered nepheline (up to 20%), and about 20% of biotite and hastingsite, plus melanite and a little pyroxene. The mesocratic nepheline syenites contain a greater proportion of pyroxene. A variant of the malignite with microcline perthite phenocrysts has been mapped. Some of the internal contacts appear to be gradational and Rinehart and Fox (1968, p. A102) report that contacts with the Similkameen granodiorites are also gradational. They suggest, further, that the Olalla stock and the Oliver pluton, lying to the north- northeast, are also alkaline and define a belt parallel to a group of five alkaline diatremes lying further south in the U.S. (see 174-00-096, Okanogan County).

Economic:
A mine producing gold, silver, lead and zinc is located within the Kruger intrusion, but based on a stockwork of quartz veins, which are probably related to the Similkameen batholith (Currie, 1976a, p. 139).
Age:
K-Ar on biotite from 'shonkinite' gave 69.9±2.1Ma but on hastingsite 170.9±5.1 Ma, while a mixture of amphibole plus pyroxene gave 152±9 Ma (for these and other determinations see Fox et al., 1977, Table 2).
References:
CAMPBELL, C.D. 1939. The Kruger alkaline syenites of southern British Columbia. American Journal of Science, 237: 527-49. CURRIE, K.L. 1976a. The alkaline rocks of Canada. Bulletin, Geological Survey of Canada, 239: 1-228. FOX, K.F., RINEHART, C.D. and ENGELS, J.C. 1977. Plutonism and orogeny in north-central Washington - timing and regional context. Professional Paper, United States Geological Survey, 989: 1-27. RINEHART, C.D. and FOX, K.F. 1968. Alkalic plutons and diatremes of northern Okanagan Highlands, Wash. Professional Paper, United States Geological Survey, 600: A102.
Map: 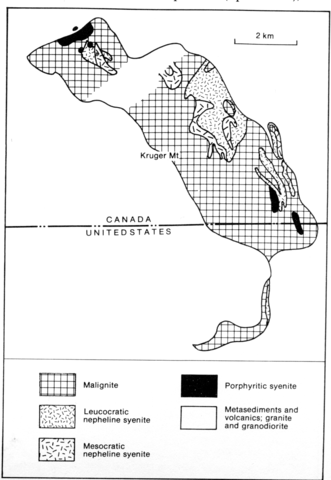