Ice River has a U-shaped outccrop pattern concave to the north, with a separate approximately circular mass to the northeast at Mt Sharp. The complex consists of an older, layered laccolithic part together with a vertical pipe of feldspar-free rocks at Mt Sharp, which are cut by a complex of nepheline syenite and syenite which produces a contact aureole up to 350-400 m wide. The pipe at Mt. Sharp consists essentially of a pyroxenite (jacupirangite) of titanaugite, magnetite, sphene, biotite and minor nepheline. Similar rock occurs at the bottom of the layered series which passes up into meta-ijolite, melanite ijolite, ijolite, urtite, ferrobustamite urtite and carbonatite. Cryptic and rhythmic layering is present and 'graded bedding' and 'channel' features occur. The pyroxenes vary from titanaugite through hedenbergitic varieties to aegirine. Carbonatite, which forms an essentially concordant mass in the northwestern part of the complex, but in detail is cross-cutting, together with numerous small dykes and sills in the layered series, is strongly foliated ankeritic carbonatite with more silicate-rich varieties. Other minerals present include phlogopite, aegirine, apatite and pyrite; pyrochlore has been identified. The later syenites are not layered, but are zoned from outer melanocratic, commonly brecciated and foliated, through mesocratic, to inner coarse syenites. The outer rocks contain kaersutite and titanaugite which changes to aegirine inwards. Perthite and interstitial nepheline increase inwards and sodalite occurs in the more leucocratic rocks. All the rock types are represented in a dyke suite and some of the strongly peralkaline syenitic dykes contain ramsayite, astrophyllite, rosenbuschite and possible eudialyte. The whole complex has been deformed and to some degree metamorphosed. Strontium isotope and some trace element values for the carbonatites are given by Deans et al.(1966).

Economic:
Pyrite, pyrrhotine and argentiferous galena were worked early in the century, but the location of most of the complex in a national park now precludes prospecting.
Age:
Determinations by K-Ar on biotite vary from 220-392 Ma and Rb-Sr on whole rocks from 244-280 Ma (Rapson, 1963; Currie, 1975). The probable significance of the variations is discussed by Currie (1975, p.52). A reliable Pb-U age on zircon of 360±4 Ma has recently been obtained by R.Parrish (K.L. Currie, personal communication, 1985).
References:
CURRIE, K.L. 1975. The geology and petrology of the Ice River alkaline complex, British Columbia. Bulletin, Geological Survey of Canada, 245: 1-68. CURRIE, K.L. 1976a. The alkaline rocks of Canada. Bulletin, Geological Survey of Canada, 239: 1-228. DEANS, T., SNELLING, N.J. and RAPSON, J.E. 1966. Strontium isotopes and trace elements in carbonatites and limestones from Ice River, British Columbia. Nature, London, 210: 290-1. RAPSON, J.E. 1963. Age and aspects of metamorphism associated with the Ice River complex, British Columbia. Bulletin of Canadian Petroleum Geology, 11: 116-24.
Map: 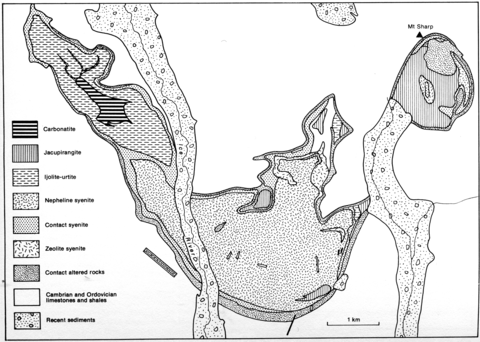