Situated in the Quesnel Trough and emplaced in volcanics of Upper Triassic to Lower Jurassic age, Cariboo-Bell is a multiple laccolith covering some 25 km2. The volcanics include flows of either trachybasalt with abundant phenocrysts of augite and fewer of serpentinized olivine in a groundmass of augite, aegirine- augite, calcic andesine and orthoclase, or analcime trachybasalt in which some of the analcime occurs as phenocrysts up to 3 cm in diameter. The laccolith comprises six phases, five of which are concordant to each other and the country rocks, while the sixth is a partly discordant breccia. The upper northeastern part of the laccolith consists in order of emplacement of syenodiorite, monzonite porphyry, intrusion breccia and pyroxenite/gabbro. The lowermost unit of the laccolith is a mafic pseudoleucite syenite with 20% pseudoleucites up to 2 cm across, in a matrix of K- feldspar, albite, nepheline, aegirine-augite, amphibole and magnetite. This rock is in sharp contact with pseudoleucite syenite containing 30-90 % pseudoleucites which may attain diameters of 4 cm. Pseudoleucite is most abundant in the lowermost third and its variation defines a gross layering. 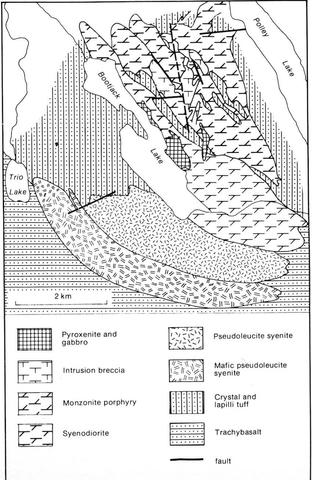