Situated at the headwaters of Galore Creek, a tributary of the Scud River, the area consists of a sequence of moderately to intensely altered volcanic rocks which have been intruded by a number of syenites. The volcanics include pyroclastic and intrusive breccias, lithic and crystal tuffs, pyroxene andesites, and trachytes and phonolites as flows or possibly sills. Pseudoleucite phonolite occurs in the northern part of the area with pseudoleucites up to 2.5 cm in diameter composed of K-feldspar and sericite, set in a groundmass of the same minerals together with biotite, garnet, epidote and sulphides. At least ten distinct syenite phases have been recognized, most of which contain K-feldspar phenocrysts and all of which are highly potassic. The 'dark syenite porphyry' is the oldest and forms a plug some 600 m in diameter as well as a nunber of dykes. This syenite is characterized by orthoclase phenocrysts up to 1.5 cm in length, and pseudoleucites up to 5 cm in diamter are found along the contacts of the plug and in one of the dykes. This rock contains >12% K2O and <1% Na2O (Allen et al., 1976, Table 1, anals 1-3). 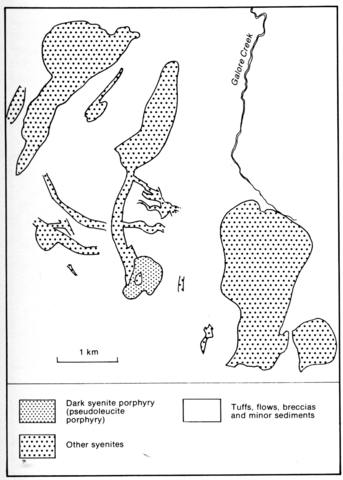