This is the largest (65x24 km) and most complex of a group of late Tertiary and Quaternary volcanoes that lie along a north- south zone of normal faults on the eastern side of the coast geanticline in northwest British Columbia. It is a composite shield volcano of gently dipping basaltic and peralkaline trachytic and rhyolitic lavas and pyroclastic deposits above tilted early Tertiary lavas and clastic sediments. Superimposed on the predominantly basaltic shield is the composite dome of Mount Edziza which rises to a circular summit crater nearly 3 km in diameter. The more acid magmas piled up near the central vent as thick, short flows, or lava domes, or erupted explosively to form ash flows and widespread ash falls. Tills, glacial-fluvial and glacial lacustrine deposits are interspersed with the volcanics and subglacial eruptions gave rise to hyaloclastites and pillow lavas. Four magmatic stages are recognized from field evidence, each beginning with large volumes of basalt and closing with relatively small volumes of more acid lava (Souther and Symons, 1974). However, more recent chronological work (Souther et al., 1984) indicates five magmatic cycles. There is a spectrum of rock types from picritic alkali olivine basalts through trachybasalts and peralkaline trachytes to comendites. All the basalts contain olivine but two types can be distinguished depending on whether the pyroxene is ophitic purple titanaugite or intergranular pale green sodic augite. Olivine does not occur in the trachybasalts which comprise zoned plagioclase (An 50-30), augite phenocrysts, usually with aegirine-augite rims, and with alkali feldspar in the matrix. The trachytes consist of phenocrysts of sanidine and/or sodic plagioclase in a very fine grained groundmass of feldspar microlites, magnetite granules and glass. Phenocrysts or groundmass aegirine and aegirine-augite occur in some samples and may contain clusters of arfvedsonite and aenigmatite crystals, the last forming 15% of some rocks. The comendites which form ash falls and flows and lava domes, all contain abundant phenocrysts of quartz, sanidine and anorthoclase, and sparse phenocrysts of aegirine, aegirine-augite and aenigmatite, and these phases, together with arfvedsonite, are found in the groundmass. Rock analyses are available in Souther and Symons (1974) and a detailed study of aenigmatite was made by Yagi and Souther (1974). Rb-Sr and Sr isotope analyses are given by Souther et al. (1984). There are numerous other volcanoes in this area which are known to be composed principally of alkaline olivine basalts, and it is very probable that alkaline and peralkaline products will be found when they are investigated in detail. 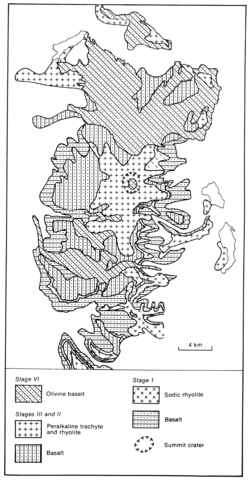