The Tombstone Batholith comprises two approximately circular intrusions, the larger of which is about 11 km in diameter. It intrudes early Cretaceous orthoquartzites, and grades from alkali syenite at its centre through monzonite and quartz monzonite to quartz diorite near the margins. The syenite, which makes up about three-quarters of the intrusion, comprises phenocrysts of orthoclase in a groundmass of microperthitic orthoclase, lesser andesine, aegirine-augite, arfvedsonitic amphibole, biotite and minor quartz; melanite occurs locally, and sphene, zircon, apatite and opaques are accessory. An intrusion of pseudoleucite tinguaite has been emplaced along the southern margin of the batholith at Spotted Fawn Creek, where it forms a dyke-like mass up to 1 km across with sharp contacts. A second occurrence with the same field relationships is found further west, but a third locality, covering about 1600 m2, lies wholly within the syenites into which it grades. The rock of the first locality contains euhedral pseudoleucites (30%) up to 4 cm in diameter and orthoclase phenocrysts (10%) up to 1 cm, in a groundmass of aligned K-feldspar prisms, nepheline, dark green to yellow biotite and a little melanite, carbonate, sphene, fluorite and cancrinite. The pseudoleucites consist of K-feldspar (60%),nepheline (20%), cancrinite (10%), calcite (5%), plagioclase (3%), biotite (1%) and melanite (1%). The pseudoleucite rock at the locality within the batholith is somewhat coarser, pseudoleucite forming about one third of the rock, and the biotite is pleochroic in shades of brown. Chemical analyses of whole rocks and pseudoleucites are available (Templeman-Kluit, 1969, Tables 1 and 2). 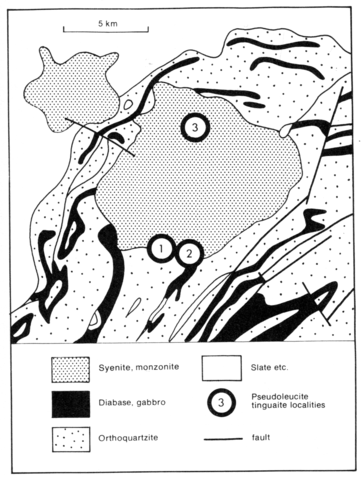