Located on the northern tip of Ellesmere Island, the Cape Richards intrusion is about 7x3 km but it is partly covered by ice, snowfields and scree. It is intruded into schists and marbles of Lower Palaeozoic age, or older. The complex consists of an outer zone of quartz monzonite and an inner zone which is essentially syenitic, but in some places dioritic. It is cut by dykes up to 1.5 m thick including peralkaline types. Most of the inner zone rocks are syenites and quartz syenites of perthite (85- 95%), clinopyroxene, zoned from pale pink cores to pale green rims and commonly surrounded by hornblende, and a little brown biotite, sphene and opaques. The greater number of dykes are perthite- phyric syenites usually with some quartz, but there are also riebeckite microgranites and quartz syenites with about 10% riebeckite. 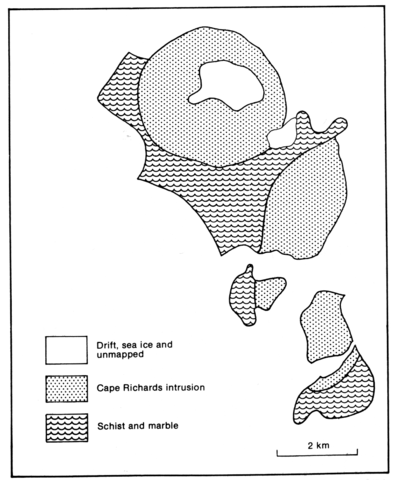