Level Mountain, north-western British Columbia, is a volcano belonging to the Northern Cordilleran Volcanic Province. The highest point is Meszah Peak at 2166 m and the whole complex covers an area of ~1800 km2. The mountain is a composite volcano composed of both a mafic shield component and a bimodal stratovolcano cap. Alkaline and peralkaline eruptives are present in both, with alkali basalt and ankaramite (pyroxene-rich basanite/alkali basalt) comprising the bulk of the shield, and trachybasalt, trachyte, peralkaline trachyte, pantellerite, comendite, and rhyolite forming the stratovolcano. Four distinct stratigraphic units of mafic lava flows comprise the shield stage, whereas dome stratigraphy is composed of five bimodal packages of flows and ejecta with felsic compositions dominating at >80%, mostly made up of comendite and peralkaline trachyte. Geochemical data including whole rock major and trace elements and Sr isotope data can be found in Hamilton (1981). Geomagnetic data can be found in Hamilton and Evans (1983) and further descriptions in Wood & Kienle (2001). 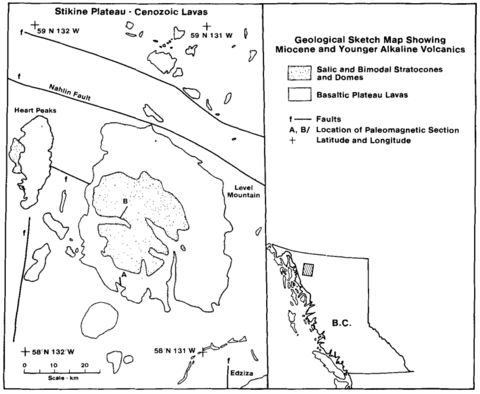