The town of Fort Selkirk , Central Yukon, Canada is home to an eponymous volcanic alkaline complex belonging to the North Cordilleran Volcanic Province. It consists of two lava flow sequences infilling valleys, and three volcanic centres in the form of vents and cones. The Wolverine Creek Sequence infills the valley of the same name to the south of the town of Fort Selkirk, composed of an 80 m thick base of basanite topped by ~70 m of alkaline olivine basalt. The Pelly Sequence is located in the Pelly River Valley to the north of Fort Selkirk, formed by ~100 m of alkaline olivine basalt. Volcano Mountain is a pyroclastic cinder cone in the far north of the complex, composed of olivine nephelinite lavas. Wootton’s Cone/Ne Ché Ddhawa is a pyroclastic cone ~10 km south east of the town formed of olivine nephelinite with subordinate late-stage basanite. The Fort Selkirk vent is formed of olivine nephelinite and subordinate, primitive basanite and found 4 km downstream from the junction of the Yukon and Pelly Rivers. Petrography and whole rock major and trace element data can be found in Francis & Ludden (1989). 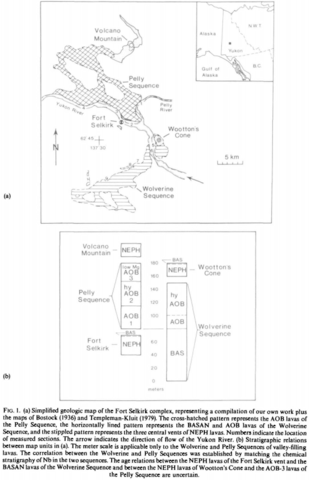