A circular complex 4.5 km in diameter, Araxa cuts and domes quartzites and schists of the Proteroxoic Araxa Group. Fenitization extends up to 2.5 km from the contact and involves mainly quartzites, to which are added alkali feldspar, eckermannite, arfvedsonite, aegirine-augite, apatite and dolomite. The main complex is concealed by a deeply weathered mantle up to 230 m thick which consists of an upper lateritic soil (2-30 m) and an intermediate residium of goethite, magnetite, baryte, pyrochlore, monazite, gorceixite, etc. in which at deeper levels monazite and gorceixite decrease and apatite appears. The bottom few metres consist of weathered carbonatite. Drilling has proved the central area of the complex to be principally of carbonatite with an outer collar of glimmerites. The carbonatites are coarse to medium grained sovites and dolomitic carbonatites passing with increasing proportions of phlogopite into glimmerites. They comprise calcite, dolomite and ankerite, phlogopite, magnetite, baryte, apatite, pyrite and pyrochlore. Silexites of chalcedony form dykes and veins and are considered to be hydrothermal. Apart from a little pyroxenite the other silicate rocks referred to by earlier workers have not been encountered during the intensive drilling. Both concentric and radial dykes are abundant in the country rocks and include sovites and lamprophyric types,containing olivine, phlogopite, magnetite, perovskite, carbonate, aegirine and melanite. Analyses of carbonatites will be found in Silva et al. (1979, Tables 1 and 2).

Economic:
The weathered mantle is worked in three separate areas. (1) In a 1 km2 area towards the centre of the complex, bariopyrochlore (pandaite) is mined for Nb in an open pit. The mined laterite contains about 5% pyrochlore and reserves are estimated at 460 million tons grading 2.5% Nb2O5. This is the largest known reserve and principal producer of Nb in the world with an annual capacity of 42 000 tons of pyrochlore concentrates (60% Nb2O5). Details of mining operations will be found in Paraiso Filho and Fuccio (1982). (2) Deposits of secondary carbonate apatite are concentrated in the northwest and southeast of the complex with estimated reserves of 560 million tons grading 11.8% P2O5. The mine has an annual capacity of 550 000 tons of apatite. (3) Rare earth deposits in the north of the complex consist of secondary earthy monazite and goyazite. Proved reserves to 15 m depth are 800 000 tons averaging 13.5% REO and 2% Nb2O5, but they are not worked at present (Sad and Torres, 1978).
Age:
Biotite from glimmerite gave 87.2±4.4 Ma by K-Ar (Hasui and Cordani, 1968).
References:
HASUI, Y. and CORDANI, U.G. 1968. Idades potassio-argonio de rochas eruptivas Mesozoica do oeste mineiro e sul de Goias. Anais Congresso Brasileiro de Geologia, 22: 139-43. PARAISO FILHO, O. de S. and FUCCIO, R. 1982. Araxa niobium mine. Mining Magazine, 146: 134-47. SAD, J.H.G. and TORRES, N. 1978. Geology and mineral resources of the Barreiro complex, Araxa, Minas Gerais. Proceedings of the First International Symposium on Carbonatites, Pocos de Caldas: 307-12. SILVA, A.B.da, MARCHETTO, M. and SOUZA, O.M.de, 1979. Geologia do complexo carbonatitico de Araxa (Barreiro), Minas Gerais. Mineracao Metalurgia, 43(415): 14-8
Map: 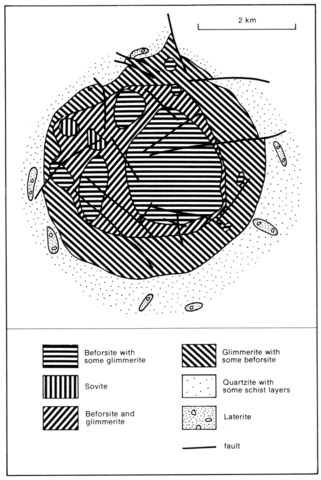