Cerro Manomo lies 20 km northeast of the Velasco Alkaline Province (022-00-007) and forms a treeless mesa of 4x6 km flanked by cliffs and talus slopes and rising 400 m above a jungle-covered peneplain of lateritized Precambrian gneiss. Ten volcanic structures have been mapped, principally from air photographs, but most of the rocks are highly altered although lavas, tuffs, phosphate rock, agglomerate and gneiss screens and xenoliths can still be distinguished. Cliff sections indicate that the volcanic complexes comprise low-dipping bedded tuffs overlain by lavas and cut by ring dykes. The lavas and dykes are considered to have been originally bastnaesite-bearing ferrodolomitic and ankeritic carbonatites which were silicified, resulting in quartz-baryte-goethite rocks. REE were redistributed into cerianite, monazite, secondary bastnaesite and La-Nd phosphates and silicates. Phosphate rock occurs as a narrow zone in the northeast of the complex and consists of apatite, dahllite, goethite, francolite, collophane and meta-autunite. There is evidence that some altered gneisses may originally have been fenitized. Late replacement zones within the lavas contain concentrations of quartz, baryte, monazite, and other REE, Mn and Nb-bearing minerals. The area is highly radioactive due mainly to Th abundances of 0.06-0.59%. Uranium averages only 12 p.p.m. but in the phosphate rock reaches 0.13%. Rock analyses are available (Fletcher et al., 1981, Table 1) and a detailed soil survey has been undertaken. 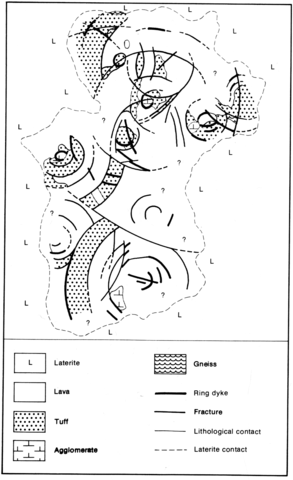