This 3.5 km diameter complex is emplaced in Precambrian metavolcanic rocks and has a clearly defined ring structure. The outermost ring, which may comprise remnants of a volcanic cone, consists of tuffs and agglomerates of trachybasalt, latite and trachyte, and within the eastern part a gabbroic rock containing 20% biotite and a little amphibole. The inner ring, which is separated from the outer by vertical fractures and in the south by crescent-shaped masses of biotite gabbro, consists of variable aegirine and quartz syenites, some varieties of which contain biotite and sodic amphibole. The central area of the complex consists of masses of hypabyssal rocks, similar to the peralkaline syenites, which are intruded into latites, glassy rhyolites and trachytes that are considered to be relics of the volcanic cone. In the northeastern part a stock-like body of pegmatitic aegirine syenite is present. Radial, ring and other dykes are numerous throughout the complex and cutting the country rocks; both peralkaline syenitic and gabbroic types are represented. Rock analyses are given by El Ramly et al. (1971) and El Reedy and El Sokkary (1982). 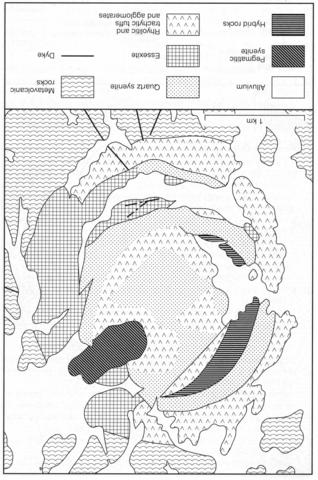