Emplaced between Precambrian volcanic rocks and granites the intrusion comprises two structures, a southern ring and a northern centre which is larger and younger. The southern structure consists of an outer ring separated from an inner one by a wadi. Both rings are of syenites and quartz syenites with aegirine-augite and subordinate biotite. The topography suggests that the northern structure also forms a series of incomplete rings that consist of peralkaline syenites, similar to those of the southern structure, together with more peralkaline granites. The northern structure is partly overlain by volcanic rocks including 'trachybasalts', with plentiful aegirine-augite and amphibole, trachytes, and so-called dacites with some 20% prismatic aegirine-augite. The complex is cut by several microsyenite and quartz microsyenite dykes. 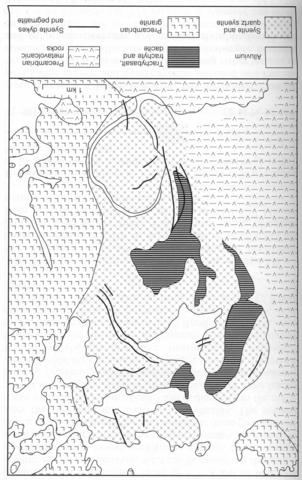