This complex, lying some 15 km south of Tarbtie - north (No.049-00-032), is similar in consisting almost totally of peralkaline syenites with the remnants of two volcanic cones. The complex is bounded on the eastern side by Precambrian schists and gneisses; on the west by Nubian sandstone. The northern volcanic cone consists of agglomerates of felsite and syenite fragments, and quartz trachytes. The southern cone comprises olivine trachybasalt and pyroclastic equivalents. The volcanic rocks are cut by peralkaline syenitic dykes as well as the main syenite intrusions. The main complex consists of two adjacent syenite centres, the ring-like natures of which are indicated by arc-shaped ridges and curving dykes. The rocks are syenites of variable grain size with a little quartz, pyroxene, sodic amphibole and biotite. A number of radial dykes in the southwestern part of the complex are described as 'serpentinized carbonatites' by El Ramly et al. (1971) and analyses of 'rauhaugite' and 'ferroan carbonatite' are quoted in Aly et al. (1983). Khalil and El Ramly (1991) further describe these dykes and in addition note the presence of 11 carbonatite plugs that are generally about 50 m in diameter. Of six chemically analysed rocks five prove to be magnesiocarbonatite and one a calciocarbonatite. Accessory minerals in the carbonatites include baddeleyite, strontianite, pyrochlore, barite and apatite. Rock analyses of the silicate rocks are given by El Ramly et al. (1971) and El Reedy and El Sokkary (1982); the latter and Soliman (1987) including trace element data. 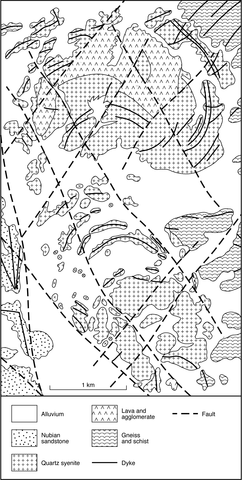