Bingo is an intrusive complex of carbonatite, ijolite and nepheline syenite of about 6x4 km that forms an elevated area above the surrounding Precambrian orthogneisses. Outcrop is poor, because of a thick lateritic cover, but loose blocks of fresh material over much of the complex and a distinctive float of iron-rich rocks overlying the carbonatite allowed the complex to be mapped with some confidence (Woolley et al., 1995). The centre of the complex, which reaches the highest point in Mt Home around which there is fresh outcrop, consists of massive flow-banded calcite carbonatite to the north and south of which are nepheline syenites and to the east ijolite, which is extensively veined by the nepheline syenite. No field relationships indicating the relative age of the carbonatite have been found. Several areas of fenite have been mapped. The carbonatite consists of calcite with magnetite, mica, part of which is tetraferriphlogopite, aegirine, apatite and pyrochlore. The nepheline syenites are coarse rocks of alkali feldspar, nepheline, aegirine-augite zoned to aegirine, sodalite, which comprises up to 40% of some rocks, cancrinite, and accessory minerals including wollastonite, titanite, biotite, melanite, fluorite, gotzenite, sodic amphibole, zircon, eudialyte, pectolite and fayalite. Certain fine-grained specimens probably derive from dykes. The nepheline syenites grade into ijolites sensu stricto with increase in nepheline but there are many rocks with only minor feldspar, and these may have been generated by feldspathization from the nepheline syenites. The pyroxene of the ijolites is aegirine-augite and wollastonite is abundant and may be partially altered to pectolite; melanite is present in most samples, titanite is ubiquitous and apatite, calcite, sodalite and biotite are minor. Fenites include quartz, syenitic and potassic types the first two containing sodic pyroxene and amphibole and minor biotite. Analyses of pyroxene, amphibole, mica, pectolite, wollastonite, gotzenite, garnet, titanite, apatite and calcite, together with 26 rock analyses, including numerous trace elements, are given by Woolley et al. (1995). A detailed account of pyrochlore, which is chemically highly variable, from the carbonatite and soil mantle is given by Williams et al. (1997). 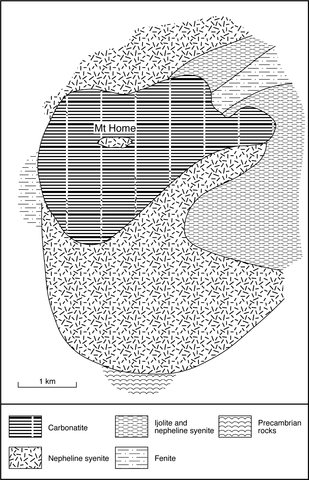