Tibesti is an elevated area of Precambrian Palaeozoic and Cretaceous rocks covering some 100,000 km2 on which 30,000 km2 of volcanic rocks have been deposited. The volcanics form the highest peaks, of which Emi Koussi rises to 3415 m, but the sub-volcanic basement reaches an elevation of 2000 m. Palaeozoic formations are absent from the central, dominantly volcanic, areas where the Precambrian rocks are overlain directly by Cretaceous Nubian sandstones indicating that updoming was initiated in pre-Cretaceous times (Vincent, 1970). Volcanism commenced in the early Tertiary with the major part of the activity in the Quaternary. The volcanic rocks can be divided conveniently into four groups, namely plateau volcanics, large central volcanoes, ignimbritic volcanoes and a final volcanic phase (Vincent, 1970). The plateau volcanism includes the first basaltic series and its differentiation products together with early ignimbrites. The basalts are essentially flood basalts with olivine and titanaugite; they are nepheline normative, but this mineral is not seen in thin section. Spectacular plugs of trachyte, trachyphonolite and phonolite are volumetrically minor and taken to be differentiates of the basalts. The rhyolites, which in the eastern part of Tibesti form three sheets intercalated with the basalts, are alkaline with abundant sanidine phenocrysts and alkali mafic silicates. The central volcanoes include large shields, with acid volcanic rocks close to the calderas, large elevated domes and some smaller rhyolitic volcanoes. There are four shield volcanoes in the central area of Tibesti, namely Tieroko, Toon, Oyeye and Yega while Emi Koussi dominates the most southeasterly part of the area. These volcanoes have diameters of 40-60 km, low profiles and are built principally of olivine-poor basalts and basaltic trachyandesites with some dacite. The elevated domes of Abeki and Dadoi are of a similar size to the shields and composed essentially of alkaline and peralkaline rhyolites with blocks of quartz syenite in associated volcanic breccias. The smaller rhyolitic volcanoes are cumulo-domes in which viscous lavas accumulated around the vent. The third major group of volcanic forms, the ignimbritic volcanoes, form very flat domes centred on large calderas more than 15 km in diameter. The Voon shield covers 2600 km2 with a volume of about 130 km3 and Yirrigue extends over 3200 km2 and has an approximate volume of 150 km3. These ignimbrites, like those of the older elevated domes, are predominantly peralkaline, including pantellerites and comendites. The final volcanic activity, which Vincent (1970) estimates to comprise only 2% of the whole, consists mainly of basalts and more differentiated rocks. The basalts, which form many small strombolian type volcanoes, are alkaline and somewhat potassic. The more evolved rocks, however, which are spatially associated with the ignimbrite calderas, have built several large cones with elevations of more than 3000 m, including Mousgou, Timi and Tousside, of which the last, although dormant, may be considered active. The products are typically potassic trachyandesites, commonly with anorthoclase phenocrysts, and trachytes; comendite obsidian occurs at Tousside. The principal petrographic accounts are those of Vincent (1963) and Lacroix (1934), the latter being particularly detailed, but not easily correlated with more modern mapping. The basalts are tholeiitic and essentially homogeneous rocks of olivine, usually as phenocrysts, titanaugite, labradorite, magnetite, ilmenite and a range of zeolites. Those of the central volcanoes commonly contain labradorite phenocrysts up to 2 cm long, augite and minor, but persistent, olivine. These rocks pass into basaltic andesites in which olivine is minor, the plagioclase is andesine-oligoclase and the pyroxene augite, pigeonite and, in some rocks, hypersthene. The more evolved products, which are represented in dykes, some of which are concentric, plugs, tuffs and breccias, as well as flows, include rhyolite, ignimbrite, trachyte, trachyphonolite and phonolite. The trachytes contain anorthoclase and sanidine, pyroxene, generally zoned from hedenbergitic cores to aegirine rims, rare arfvedsonite and riebeckite as well as kaersutite and, in the phonolites, nepheline, often replaced by analcime or zeolites, opaque phases, rare fayalite and titanite. The peralkaline rhyolites, which are the predominant type, are characterised by the presence of phenocrysts of fayalite, hedenbergite-aegirine and sometimes sodic amphibole. Both comenditic and pantelleritic types occur and these grade into trachytes. Numerous variants of the more felsic rocks have been described in some detail, particularly by Lacroix (1934), including coarse-grained varieties forming small intrusions and included blocks. Field and textural features of the ignimbrites are described at some length by Vincent (1963a and 1963b). Numerous chemical analyses, not including trace elements, are given by Lacroix (1934) and these, together with others, are collected by Vincent (1963a). Large numbers of black and white photographs illustrating volcanic forms, field relationships and petrography will be found in Lacroix (1934), Gèze et al. (1959) and Vincent (1963a). Gèze et al. (1959) describe the field relationships and forms for many separate centres and include a geological map in colour. A general review is that of Vincent (1970). 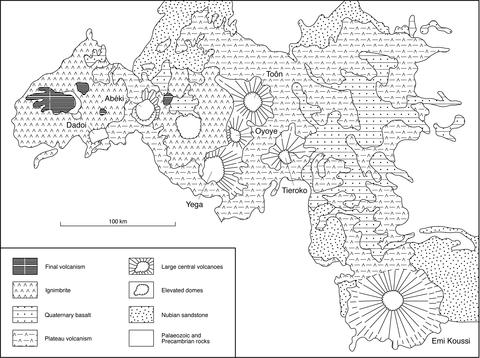