Nganha is a large, composite volcano with an elevation of about 1000 m which is situated within the Ngaoundere volcanic field (No. 18) at the eastern end of the Adamawa Plateau . Nono et al. (1994) distinguish four principal events. (1) Eruption of numerous basaltic flows, which can be sub-divided into upper, middle and lower series. (2) Deposition of voluminous breccias, most of which were deeply eroded and not covered by later trachyphonolites. (3) Eruption of trachytes and phonolites as thick, radially distributed flows and (4) basaltic activity, which was confined to the summit area. 87% of the volcano is covered by basaltic flows the bulk of which comprise the middle series of the initial basaltic eruptions. The last summit basaltic lavas, in contrast, are very small pahoehoe flows; they contain numerous xenoliths of trachyte. Two major phonolite flows occur the one extending down the southwestern flank being sub-vertically jointed, individual columns having diameters of 6-8 m. The phonolite flow on the southern flank is the largest flow on the volcano with an area of 15 km2 and volume of 1.5 km3. There are numerous trachyte flows which typically erupted from the summit area. Volcanic breccias consist of centimetre to decimetre diameter blocks of basalt, trachyte, phonolite and granite set in a whitish matrix. The lavas included by Nono et al. (1994) in their basaltic rocks (events 1 and 4) include ankaramite, basalt, hawaiite, mugearite and benmoreite. Ankaramites contain clinopyroxene and olivine phenocrysts, and some varieties abundant large altered kaersutite crystals and alkali feldspar xenocrysts, in a matrix of plagioclase, clinopyroxene, oxides and late biotite. The basalts are similar but with fewer phenocrysts while the hawaiites, mugearites and benmoreites are characterised by the absence of mafic phenocrysts, the first comprising >90% plagioclase including microphenocrysts and the latter two containing sparse phenocrystal and groundmass alkali feldspar. The phonolites contain phenocrysts of alkali feldspar, aegirine-augite and hauyne, nosean or sodalite in a matrix of alkali feldspar, clinopyroxene, ilmenite and rare titanomagnetite and glass. Phenocrysts of alkali feldspar are ubiquitous in the trachytes with rarer amphibole, biotite and iron oxides, and they are set in a matrix of dominant alkali feldspar, clinopyroxene, arfvedsonite or richterite with accessory biotite, titanite and chevkinite. Probe analyses of the mineral phases are given by Nono et al. (1994) who present a particularly comprehensive data set for the pyroxenes which extend to near aegirine in some phonolites and trachytes. Analyses of 46 rocks, including REE and other trace element data, and Sr isotope ratios for 10 rocks, are given by Nono et al. (1994) but the fact that five phonolites and more than half the trachytes contain normative quartz is not discussed. 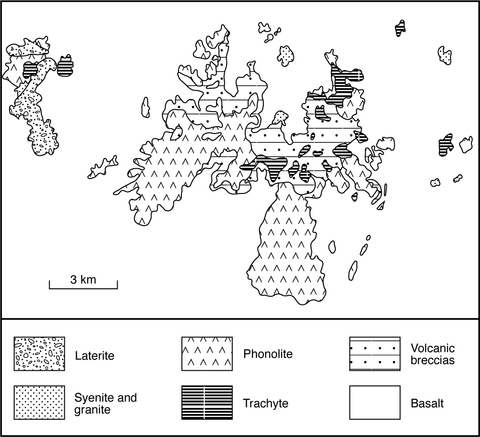