The hill of Tchivira rises sharply some 1400 m from the surrounding rounded topography, covers more than 100 km2 and has a concentric structure which is discernable on air photographs. There are photographs of the area in Alves (1968). The Bonga carbonatite complex (No. 30) is located only 11 km to the northeast. The country rocks are principally Precambrian granites, migmatites and schists but there are three bodies of gabbro which are cut by, or enclosed within, the alkaline complex. The most abundant rocks of the complex are nepheline syenites and ijolites which form two arcuate bodies to the east of a carbonatite centre. The outer arc is discontinuous and separated from the inner by a screen of basement granite. Quartz-bearing syenites predominate in the south and, according to Lapido-Loureiro (1973), grade both into granites and nepheline syenites, which could be the result of contamination of nepheline syenite by granitic country rocks or fenitization. Coltorti et al. (1993) link the syenites, which they describe as being nearly saturated to undersaturated, with the gabbros which, in contrast to Lapido-Loureiro (1973), they consider to cut the carbonatite ring so that they recognise two suites, the earlier one comprising nepheline syenite-ijolite-carbonatite and the later alkali gabbro-syenite. The northwestern part of the complex is dominated by two arcuate areas of carbonatite and feldspathic breccia distributed around a core of nepheline syenite. Two areas of what is probably K-feldspar fenite lie along the eastern contact of the eastern carbonatite arc against ijolite. There are several dyke systems in the area which include tephritic and phonolitic types (Coltorti et al., 1993). The nepheline syenites contain nepheline (up to 35%), which is generally intensely altered, alkali feldspar, often displaying microcline twinning, analcime, cancrinite and fibrous zeolite. Accessories include aegirine-augite, with deeper green rims, arfvedsonitic and hastingsitic amphiboles, biotite, magnetite, titanite, apatite, calcite, fluorite and a member of the wohlerite group. The ijolitic rocks vary from melteigite through to urtite and are characteristically heterogeneous. They appear to be younger than the nepheline syenites, on the evidence of included blocks and veins. The nepheline of the ijolites is generally fresh, but there is some alteration to cancrinite and zeolite, and the pyroxene is an aegirine-augite or aegirine; biotite, apatite, an opaque phase, titanite and in some schorlomite are also present. The syenites of the southwest consist of perthite, biotite, compositionally variable amphibole, which in some areas is arfvedsonitic and, where present, aegirine or aegirine-augite. Reddish syenites with visible quartz, which could not be mapped separately, may be fenites. The gabbros, syenogabbros and syenites are described by Cortorti et al. (1993) as being cumulates and grading into each other. The carbonatites give rise to a high relief but the outcrops are porous, breccia-like and frequently contain xenoliths of feldspathic or granitic rocks. The carbonatites of the western arc are invariably strongly silicified with complete substitution of carbonate by silica. They contain much barite and fluorite, the latter sometimes as well developed crystals in geodes. The feldspathic enclaves are syenitic rocks, possibly fenites, containing barite, opaques and relict pyroxene or amphibole, while other inclusions are fragments of brecciated and feldspathic carbonatite, quartz and apatite, in some areas the last mineral being abundant. The eastern arc carbonatites generally contain calcite, with subordinate dolomite and ankerite, commonly include barite and in some areas are biotite-rich; there is accessory pyrochlore, apatite and pyrite. The feldspathic fenites are finely brecciated rocks of orthoclase which is generally fractured and cut by veinlets of tourmaline, quartz, barite, apatite and fluorite. The tephritic dykes contain phenocrysts of altered olivine, Ti-salitic pyroxene, plagioclase (An78-59) and microphenocrysts of titaniferous magnetite in a groundmass of plagioclase (An57-51), clinopyroxene, kaersutitic amphibole, biotite, magnetite, scarce olivine and rare nepheline and analcime. The phonolitic dykes vary from phonotephrites containing plagioclase phenocrysts to phonolites free of plagioclase and with acmitic pyroxene. The phonotephrites contain rare olivine, salitic pyroxene, plagioclase and Ti-magnetite in a groundmass of alkali feldspar, minor plagioclase, pyroxene, brown amphibole and a little nepheline. The phonolites have phenocrysts of clinopyroxene and sanidine and/or anorthoclase while olivine, plagioclase and pargasitic amphibole are rare or absent; the groundmass comprises amphibole, alkali pyroxene, alkali feldspar, nepheline and subordinate biotite. Rock analyses are given in Lapido-Loureiro (1973) and Alves (1968). Coltorti et al. (1993) present a full suite of rock analyses, including REE data, probe analyses of pyroxene, olivine, magnetite, amphibole and biotite and discuss the genesis of the complex at some length. Five further analyses of carbonatites, including C, O, Sr and Nd isotope data, are given by Alberti et al. (2000), but these are from “Tchivira-Bonga” without distinction of the two complexes. 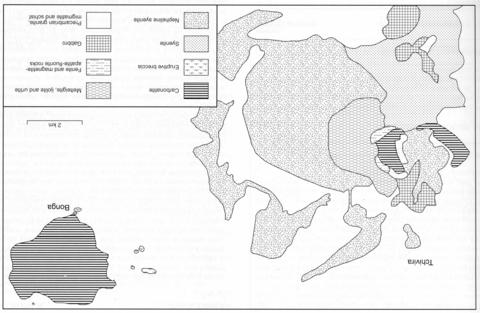