Emplaced in Precambrian granite gneisses the Monte Verde complex is elongated northeast-southwest but part of the complex, particularly to the north and west, is obscured by alluvial deposits. The principal intrusive phase is nepheline syenite with lesser amounts of carbonatite; fenites are extensive. The nepheline syenites form several bodies in the central and southern areas of the complex and both coarse- and medium-grained varieties occur with the abundance of nepheline highly variable. The nepheline commonly forms small grains in optical continuity enclosed in alkali feldspar, which generally displays microcline cross-hatching. A colourless pyroxene, amphibole and biotite are plentiful and accessories include wollastonite, apatite, analcime, titanite, zircon and opaques. Carbonatite occupies eight small areas scattered across the complex but generally located within fenites. It consists mainly of calcite, but dolomite is also present, with subordinate pyroxene, amphibole, apatite, pyrochlore, barite, strontianite, phlogopite and iron oxides. Extensive breccias are located mainly along the eastern margin of the largest nepheline syenite intrusion but also as several other discrete bodies. They consist of clasts of syenite and granite in a syenitic matrix. On the map of Lapido-Loureiro (Fig. 11) an extensive, arcuate body of "fenitized rocks and breccias" lies to the east of the nepheline syenites, but from thin section descriptions (Lapido-Loureiro, 1973) it is probable that intrusions of feldspathoidal rocks are also present within this area, including nepheline and hauyne-bearing syenites. Dykes of tinguaite, trachyte and solvsbergite occur. An average chemical composition, including some trace elements, of carbonatite is given by Issa et al. (1991). Alberti et al. (2000) give full chemical analyses and C, O, Sr and Nd isotope data for six carbonatites and a carbonatitic syenite. 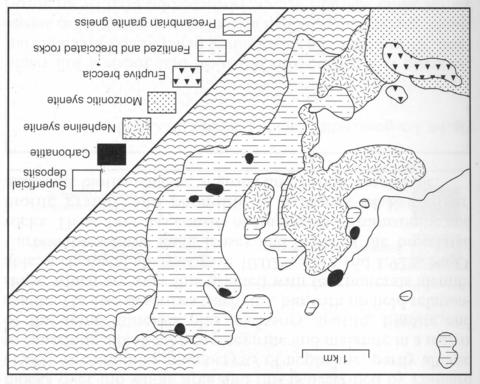