It has been proposed by Ouzegane et al. (1988) that a group of rocks occurring northwest of the Hoggar, and formerly described as brecciated metamorphic marbles, are carbonatites. They are emplaced into Archaean granulite facies rocks as small bodies, sometimes associated with syenite, of which 13 are located on a map accompanying Ouzegane et al. (1988, Fig. 1). As a result of further work Fourcade et al. (1996) consider that the syenites are fenites and they present more detailed maps of three of their carbonatite centres. The marbles comprise small lensoid bodies, up to several hundred metres in length, intercalated in the granulites. The marbles are characterised by a banded structure defined by alternating layers of olivine (Fo92) + spinel and carbonates, while these minerals also form nodules; diopside and grossular are present in some areas. Olivine and spinel are never found in the rocks identified as carbonatites. Field relationships indicate the post-metamorphic intrusions of the area, in order of emplacement, to be syenite, early carbonatite, late carbonatite, dolerite and rhyolite dykes, aplitic alkaline granite and late alkaline granite. The syenites, interpreted as fenites, are intimately associated with the carbonatite and form irregular bodies up to a kilometre or more long which are concordant with the enveloping granulites. They are not peralkaline consisting of microcline perthite (48-80%), salite-diopside (16-48%), which may be rimmed by a calcic amphibole and garnet, a maximum of 3% quartz, wollastonite and calcite. The early carbonatites are brecciated rocks forming veins up to 50 m thick and 500 m long located along fracture zones cutting the syenites or lying within their banded structure. They comprise fragments and mineral grains of syenite in a matrix of calcite (57-70%), pyroxene (6-26%), rare earth-bearing (0.5-1.5%) fluorapatite (4-18%), allanite (3-17%), calcic amphibole and accessory K-feldspar, magnetite, titanite, zircon and rare mica. The late carbonatites form smaller veins with maximum widths of 2 m and lengths of 30 m which cut the earlier carbonatites. They are pegmatitic and of calcite, apatite (up to 50% and with crystals up to 10 cm long) containing as much as 40% of inclusions of which britholite is found with calcite and allanite, wollastonite (up to 62%), quartz, Fe-salite, K-feldspar, sometimes grossular-andradite and occasionally scapolite. Carbon and oxygen isotope data (Ouzegane et al., 1988) are typical for carbonatites with unaltered, early carbonatites giving the lowest values. REE are typically light RE enriched and significant REE values are found in calcite but are low in marbles. Whole rock chemical data, including trace elements, and numerous mineral analyses for the carbonatites are in Ouzegane et al. (1988) and Foucade et al. (1996) give analyses of carbonatites and fenites, including many trace elements, and Nd, Sr, O and C isotopic data. Rock analyses, including trace elements and Pb-U, Nd and Sr isotope data are given by Bernard-Griffiths et al. (1988). Although the granites of the area are referred to as alkaline, no petrographic details have been found to confirm their peralkalinity. 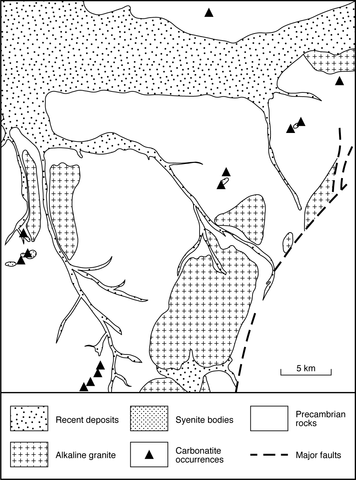