The complex covers about 450 km2 and according to Emeleus and Harry (1970) comprises the four distinct intrusive centres of Motzfeldt, North and South Qoroq and Igdlerfigssalik, the last having two distinct phases. A number of small satellite bodies, which are predominantly older than the main centres, and numerous trachytic and Big Feldspar Dykes chiefly belonging to the Mid-Gardar swarm, also occur. The intrusions cut members of the Ketilidian Julianehab granite suite which include diorites, granodiorites, amphibolites and some gneiss, as well as isolated areas of sediments and volcanics of the Eriksfjord Formation. Each of the major centres consists of several nepheline syenite intrusions and 28 separate units, as well as small dyke-like bodies of syenogabbro and alkali gabbro, were mapped by Emeleus and Harry (1970, Plate 4). Preliminary results of more recent work on the Motzfeldt centre are described by Tukiainen et al. (1984) and Tukiainen (in press), who revise the nomenclature erected by Emeleus and Harry (1970). The centre covers about 150 km2, including areas that are partially ice covered. There is a little fenitization adjacent to the margins, and extensive alteration of xenoliths. The first major phase of intrusion involved emplacement of stocks of peralkaline syenite and nepheline and sodalite syenite of the Geologfjeld Formation. These are truncated by intrusions of the Motzfeldt Ring Series which are concentric, steep-sided intrusions with outward-dipping margins, comprising arfvedsonite syenite and a range of nepheline syenites. The nepheline syenites are laminated but rarely display mineral layering and comprise alkali feldspar, nepheline, alkali pyroxene, amphibole and sometimes biotite, with occasional analcime, natrolite and fluorite. Finally, there was emplacement of a series of sheeted intrusions including fayalite alkali syenite and a suite of peralkaline microsyenites including varieties rich in eudialyte (Tukiainen, in press). The most detailed map available is in Tukiainen (in press, Fig. 1). An account of Zr-bearing aegirines from Motzfeldt is given by Jones and Peckett (1980) and of the mafic mineralogy by Jones (1984). The North Qoroq centre consists of five major intrusions which are approximately arcuate about a centre now obliterated by intrusion of the South Qoroq centre, together with a number of smaller intrusions (Emeleus and Harry, 1970). As at the Motzfeldt centre external and internal contacts are steep. The major intrusions are mainly foyaites and are variably laminated, granular, porphyritic and xenolithic and consist of alkali feldspar, usually perthitic, nepheline, aegirine-augite and amphibole, which are generally interstitial, variable biotite, occasional fayalitic olivine and rare aenigmatite and analcime. The South Qoroq centre now covers about 80 km2 but was originally much more extensive before being partially replaced by the later Igdlerfigssalik centre. South Qoroq comprises three concentric stocks of foyaite which were followed by a partial ring dyke of augite syenite, together with minor intrusions of syenite, a small area of essexite and four satellitic nepheline syenite intrusions. Layering with concentrations of olivine and pyroxene alternating with leucocratic syenite is well developed in the syenites and less well developed in one of the foyaites, while xenoliths are relatively rare in the rocks of this centre. The foyaites comprise alkali feldspar, nepheline, usually relatively sparse, sodalite, aegirine-augite, fayalite, arfvedsonitic amphibole, opaques, aenigmatite and apatite; the mafic minerals are commonly gathered in patches. The essexite forms a dyke cutting nepheline syenite and contains nepheline and analcime interstitial to plagioclase zoned to alkali fledspar, olivine, augite and some biotite. A detailed account of the petrography, felsic mineralogy and geochemistry is given by Stephenson (1976) who has also published on the pyroxenes (Stephenson, 1972) and on Mn and calcium-enriched olivines (Stephenson, 1974). The Igdlerfigssalik centre covers some 140 km2 and consists of a group of three earlier nepheline syenites which were separated from four later nepheline syenite intrusions by emplacement of the Mid-Gardar dyke swarms. The earlier syenites comprise alkali feldspar, nepheline, aegirine-augite or augite, fayalitic olivine and sometimes alkali amphibole or biotite. They are usually well laminated but mineral layering is rare. The earliest of the four later syenites has a number of variants, some of which display well developed mineral layering on various scales; it is a pyroxene-nepheline syenite generally with biotite, fayalitic olivine and amphibole. The later nepheline syenites have similar mineralogy although with variations in the proportions and textures of the minerals. The youngest member consists of various syenites which develop a series of layers resembling a stack of shallow saucers with upturned margins. An alkali gabbro/dolerite dyke up to 200 m thick and 6 km long occurs in the eastern part of the Igdlerfigssalik centre and develops good mineral layering in places. As well as labradorite zoned to sodic plagioclase and alkali feldspar, olivine and clinopyroxene, the rock contains interstitial nepheline. Mineral compositions and a discussion of the crystallization history of Igdlerfigssalik based on thermodynamic studies of mineral equilibria are available in Powell (1978). The very numerous Gardar dykes of the vicinity are part of the swarm which extends west-southwestwards via Ilimaussaq to Tugtutoq. In the Igaliko vicinity there is a group older than the earliest nepheline syenites; a group which cuts all the syenites except the later group of the Igdlerfigssalik centre, and a third group which post-dates even these syenites. The principal types represented are trachytes, quartz trachytes, phonolites, dolerites, including varieties with plagioclase phenocrysts up to 15 cm long, and a range of lamprophyres. About 15 small dykes of carbonatite were found throughout the complex and carbonatite also occupies a breccia plug in the North Qoroq centre. Gardar dykes are found north of Igaliko, including several giant dykes up to 650 m wide, traversing Mellemlandet and G. F. Holm Nunataq; they range in composition from alkali olivine basalt to trachyte and rhyolite , with scarcer phonolitic trachyte associates (Upton and Fitton, 1985). At Syenitknold an internally differentiated dyke includes syenogabbros, layered syenite cumulates and nepheline-aegirine pegmatites. The region also contains relatively abundant small carbonatite and carbonated ultramafic lamprophyre dykes, sills and plugs. Blaxland et al. (1978) discuss the origin of Igaliko in the light of Sr isotope studies. 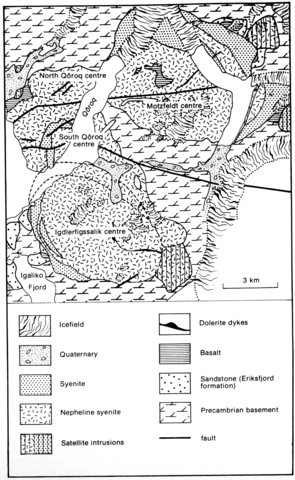